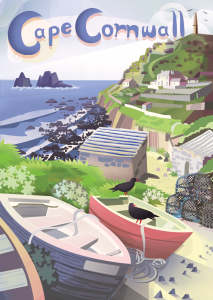 Cape Cornwall or Kilgoodh Ust, meaning “goose back of St Just” is a small headland in Penwith. West Cornwall. It is four miles north of Lands End and is a true Cape. A Cape is the point of land where two bodies of water meet. Until the first Ordnance Survey, 200 years ago, Cape Cornwall was believed to be the most westerly point in England. It is home to choughs, the Heinz tower and a National Coastwatch station. The cove below it is called Priests Cove is a Site of Special Scientific interest. It has the most amazing geology.
The Brisons, two offshore rocks, are located approximately one mile southwest of Cape Cornwall. They are thought to look like Charles de Gaulle lying in the bath with his belly sticking out.