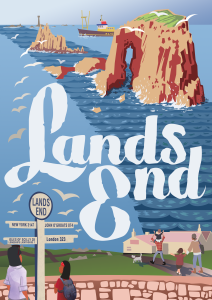 Land’s End is the legendary Cornish destination that has inspired people since ancient Greek times when it was referred to as Belerion – the shining land. Archaeological discoveries have artefacts dating as far back as the Mesolithic Period meaning that people have been living and travelling to and living at Land’s End for ten thousand years or more. Throughout the ages, Land’s End has held a fascination for many people and the place has inspired many stories and works of art. The mythical ‘Lost Land of Lyonesse’ is said to lie beneath the waves between Land’s End and the Isles of Scilly; according to legend, Lyonesse was apart of King Arthur’s realm which was drowned by the sea tempestuous night.