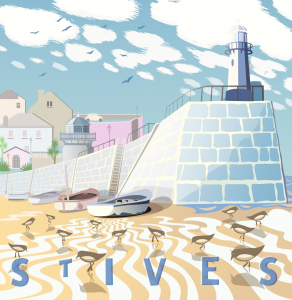 St Ives means St Ia’s cove It is a seaside Town which lies on the coast of the Celtic Sea. In former times it was dependent on fishing but later became one of the most popular tourist resorts in Britain. Artists flocked here because of it’s extraordinarily clear light.
The origin of St Ives is attributed in legend to the arrival of the Irish Saint Ia in the 5th century. She was purported to have arrived firstly in Hayle floating from Ireland on a cabbage leaf. The people of Hayle shunned her and so she set to sea again to land at St Ives where she was welcomed and a parish church built in her honour